But Where's the Pepperoni?

Okay--there--I asked the question before anyone else could. Because any time I talk about making (or ordering) pizza with alternative toppings, someone invariably mourns the absence of pepperoni. And, of course, that classic, spicy meat certainly does top the list of favorites for lots of folks. But with spring in the air, I felt a hankering for something lighter and very different:

I think it was chef Wolfgang Puck (of Spago, a Beverly Hills celebrity favorite restaurant) who first intrigued me with a similiar combination of ingredients. And I loved the idea of sweet, tangy and cheesy.
Last night I finally tried it.
Perfect timing, too, since it was a glorious almost-spring day, and hubby and I had hosted our little grand daughters (aka The Princess Sisters) all day and there wasn't a lot of time (or energy) left to fuss in the kitchen. Quick trip to the grocery store to gather a few ingredients and I was ready.

I started with onions: 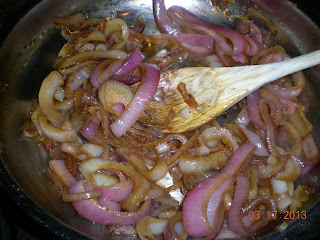 One large onion sliced ( I used half a yellow, half a red) and cooked very slowly in a small amount of oil and butter, until soft, sweet and a "caramel" brown color. I added a little water to keep it moist as the onions cooked down. A pinch of sugar and salt. And a splash of Balsamic vinegar at the last.

Then I shredded up some cheese: 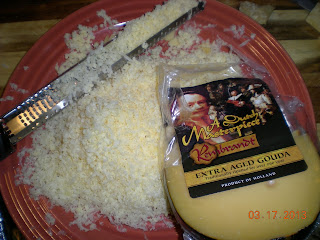 And prepared a crust: 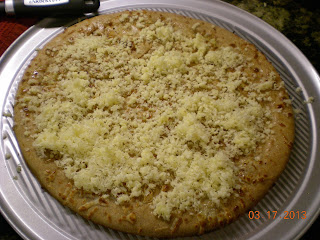 To save time, I used a pre-made whole wheat Bobolini brand crust. I spread it with a small amount of extra-virgin olive oil and sprinkled on half the shredded cheese. 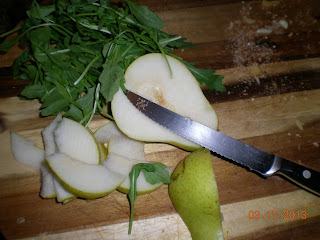 A thinly sliced Bartlett Pear (Asian would be great, too), and a large handful of fresh Arugula greens (their "peppery" flavor is a great complement to the sweetness of the other toppings

Then I layered it all on the crust: 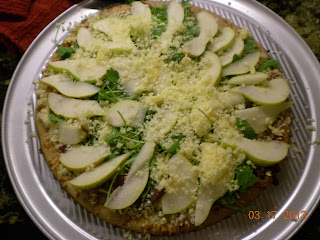 First the caramelized onion, then the sliced pear, the arugula, and finally the remaining cheese.
Isn't that pretty?

(According to the Bobolini crust instructions) the pizza went into a 450-degree oven for approximately 10 minutes, or until the pear was soft and the cheese nicely melted. Like this: 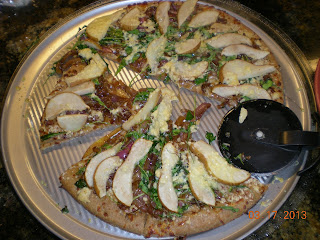 Mmmm! Let me tell you, this easy spring pizza was delicious!

And now, just because we credited Wolfgang Puck with this idea, here's a teeny humorous snippet from my upcoming book, RESCUE TEAM that mentions this famous chef.

In this scene, our hero Wes Tanner has just told his hospitalized best friend (funeral director, Gabe) that he spent a day with the book's heroine, Kate. A date that included some of Austin's famous and unusual eating venues:
***

“Trailer food? You couldn’t do better than that?” Gabe set the brake on his wheelchair. It was clear Wes’s account—an edited version—of yesterday’s outing with Kate  was far better than hospital entertainment. “She’s from California. Probably knows ol’ Wolfgang personally.”
“Wolfgang?”
“Wolfgang Puck. Famous L.A. chef—don’t you watch the Food Network?”
“Not if I can help it.” Wes raised his brows. “You do?”
Gabe grinned. “Mom. At the funeral home. Unless there’s a visitation and viewing. Then it’s Wolfgang Mozart.”
“Yeah, well . . .” Wes pointed at his friend’s leg extended straight out from the hip in the wheelchair. “If you don’t pull that robe closed, there’ll be an unfortunate viewing right here.”  He laughed at Gabe’s immediate scramble for modesty. “When are they springing you from this place?”
“Maybe tomorrow. Don’t change the subject. You were telling me about this date.”
Wes frowned. “It wasn’t a date. I told you, I was thanking Kate for what she did to help Dylan.”
“Nice try, Tanner. I got shot—I don’t see you offering the Hey Cupcake! tour to my trauma surgeon.” He raised his brows. “So?”
“I . . . don’t know,” Wes admitted. It had been a long time he’d taken serious interest in any woman. “I get the feeling Kate’s kind of a loner. And that she might not stick around long.”  He was surprised by the sudden thought, more so by the immediate discomfort it created. He hoped he was wrong.


***
So there you go. A recipe idea and a book snippet. Hope you enjoyed both.

And now a few questions for YOU:

What are your favorite pizza toppings?
Where did you enjoy your most memorable pizza?
Do you ever make pizza at home?
Posted by CandaceCalvert at 7:51 AM

I love everything that falls under pizza, but a favourite topping is pepperoni and/or pineapple - no pears. (-: Thank you! And I love that exerpt...would like to get my hands on the book right now.