A week before Christmas, and I'm crossing off lists, thumbing through recipes, and decorating everything that stands still. 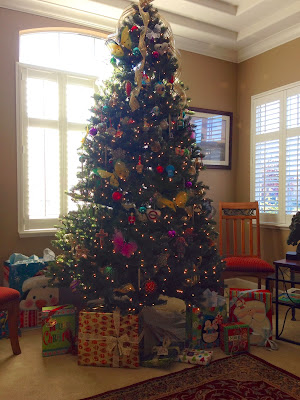 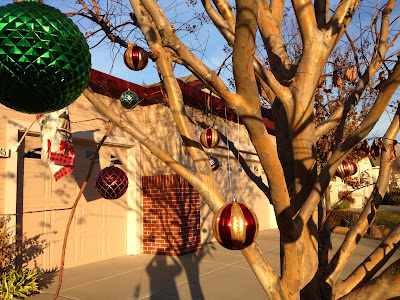 When I was climbing the ladder to hang these oversize ornaments on our bare crepe myrtle tree, a (very wise) neighbor called out, "Be careful up there!"--probably heard the rumor about my acorn-ankle incident. Sigh. Infamous.

Speaking of neighbors, I always try to gift a little cheer to those special folks who make us grateful we live where we do. Mostly, I take cookies. But this year, I'm saying NUTS to that idea, and stirring up several batches of one of the favorite Calvert house munchies. A sweet and spicy nut mix that is perfect for gifting, adding to your cookie tray, or enjoying as you wrap presents, wipe away a tear over  "A Wonderful Life," a  Hallmark Christmas movie--or root wildly for your favorite football team.

So here we go, a very easy and very yummy recipe: 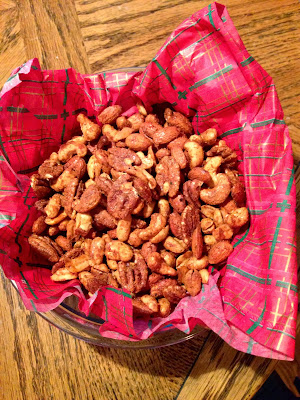 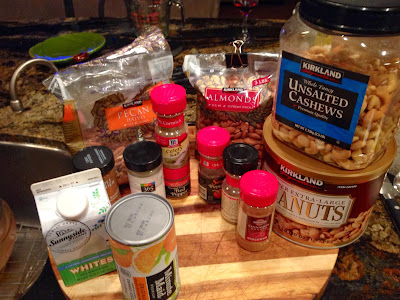 Mix all ingredents together in a large bowl. 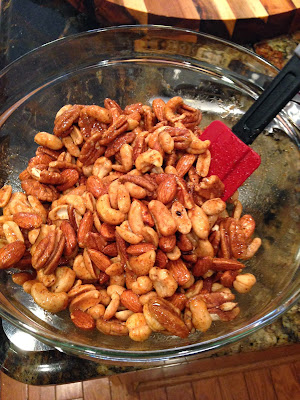 Stir well to coat the nuts.
Then spread the mixture onto your prepared pan: 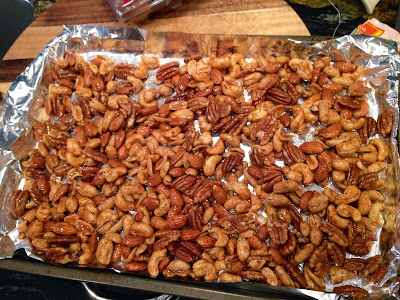 Bake for 20 minutes, stirring twice.
Cool. Break apart large clusters.
Store in an airtight container (or zip lock bag) for up to one week--if they last that long!

So that's it, easy-peasy. And a nice higher protein complement to the Christmas cookie fest.
Here's a photo of the nuts all packaged up (with a few pretty chocolates added) and ready to take to the neighbors: 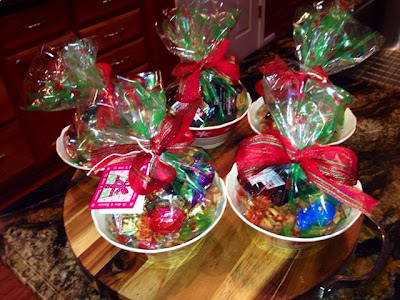 And while we're making ourselves NUTS, crossing off lists, climbing up ladders, and trying to make everything "merry and bright," let's find some moments to take a deep breath and remember that it's the simple pleasures that are most important. Those everyday things we too often take for granted as we let the busy-ness of our lives take over. In this season of miracles, let's be grateful for the beauty and affirmation of those perfect blessings. Like this one we saw last night, above that ornament-adorned crepe myrtle tree: 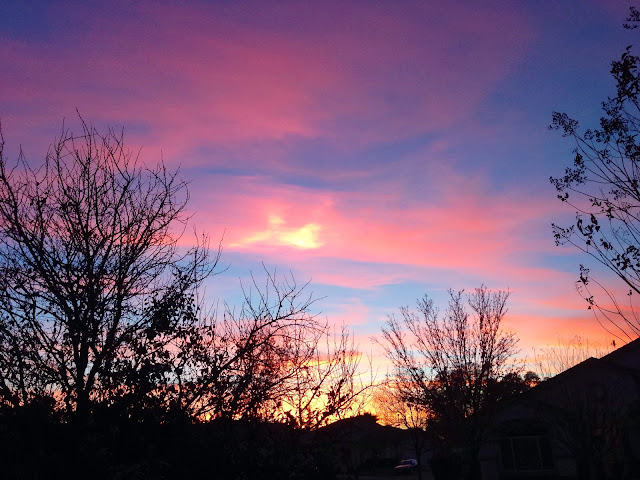 Courtesy of God the Artist.

My guest today is the award-winning author of over one dozen titles for Barbour Publishing. In 2009, she was voted one of the favorite new authors by Heartsong Presents book club readers. Her historical romance, All That Glitters, was a finalist in ACFW's 2010 Carol Awards. She makes her home on the doorstep of the Texas hill country with her husband and a herd of cats who have them well-trained. She loves reading, cooking, watching movies, and is always up for a Texas road trip. Please wave your wooden spoons in a warm Authors' Galley welcome for
Lynette Sowell. 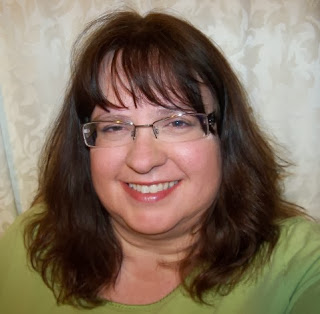 “You may be an undigested bit of beef, a blot of mustard, a crumb of cheese, a fragment of underdone potato. There's more of gravy than of grave about you, whatever you are!”
― Charles Dickens, A Christmas Carol

These are my favorite lines from one of my favorite Christmas stories. Scrooge is huddled alone in his big dark house and he's tucked beside his fireplace on Christmas Eve. Of course, he's in denial about the fact that his deceased business partner, Jacob Marley, has come back to visit—and warn him.
Dickens' lines above make me smile every time. Scrooge thinks Marley's appearance is a figment of his own indigestion.
Instead of having Scrooge say, “It must have been something I ate,” Dickens had Scrooge blame the gravy.
I blame the gravy, too. Gravy and I? Well, let's say there are many things I can cook, and cook well.
But gravy? There's a 50-50 chance that I'll either get it right, or end up with a lump of, ah, something in the pot.
This year for Thanksgiving, I was spared the ordeal of making gravy because my in-laws made the turkey. The rule is, whoever makes the turkey makes the gravy, too. But Thanksgiving not at our home meant we'd have few leftovers. So this meant I'd make a turkey anyway.
I can roast a great turkey, but this year, for some reason, I didn't end up with as many drippings as I usually do for making gravy.
No problem. I could improvise. I'd simply make a roux out of the drippings I did have by adding flour. . I whisked the turkey drippings and flour on the stove. Looking good...
Then I added some water and milk, and yes! The gravy thickened. And thickened. And thickened.
It resembled the consistency of that paste kids used school once upon a time, the kind one kid in the class always tried to eat.
My daughter saw the gravy and frowned.
“Uh, Mom. You need to add some liquid to that. It's too thick.” She's an accomplished young cook herself, and yes, she was right.
So I tried to thin the gravy, and the verdict came back: “It tastes like, uh, flour.”
Gravy and I? We don't get along anymore. I think next time I make a turkey, I'll leave the gravy to my husband, or get packets of the just-add-water gravy mix. That, I can do.

In my new release, Tempest's Course, my heroine Kelly isn't much of a cook. She's very work focused and while she likes a tasty dish, she doesn't care to spend the time in the kitchen, only cooking for herself. I think she would have plenty of sympathy over my gravy predicament.
A few blocks from the former home of a whaling captain, where Kelly's preparing a bid to restore an old quilt, she stumbles upon a little storefront soup shop, much to her delight. I based this shop on Destination Soups, a place in New Bedford, Mass., where my book is set. They have amazing clam chowder:

***
The breeze cut through her jacket, so she made her way up a couple of blocks from the harbor. A few shops lined the street. A carved wooden sign swung above one storefront, Soup Nation. Someone opened the door and a swirl of scents drifted onto the sidewalk.

Kelly's stomach growled. She'd skipped breakfast while making the final touches on her bid that morning. She entered the shop and inhaled the mouthwatering aroma. Someone had just pulled a loaf of bread from the oven, too.

She ordered half a grilled cheese panini and a bowl of the fresh tomato soup, then slid into an empty booth. The tiny restaurant enveloped her with its warmth as she sipped her soup and enjoyed the tang of the cheese sandwich. Lottie would greet her with a grilled cheese sandwich after school, Kelly and the posse of kids walked from the school bus.

Kelly lifted her soup bowl as if in a silent toast, then set it on the table in front of her. A whoosh of air made her look up as the door opened.

The curly haired grouch from the other day stood in the doorway. He stopped when their gazes collided. He nodded at her.


Hey,” he said as he passed by on his way to the counter. 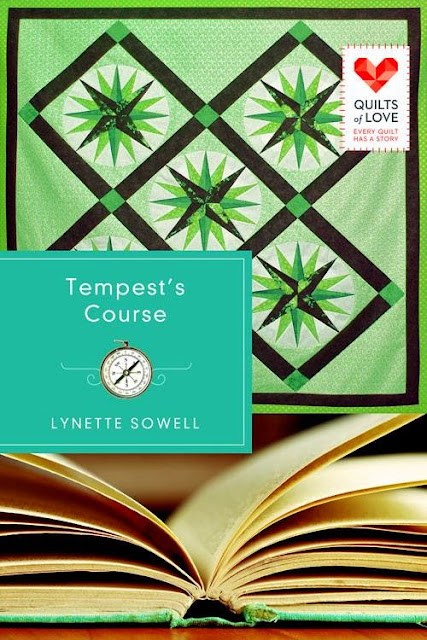 Kelly Frost, a textiles conservator, is invited to the Massachusetts coastal city of New Bedford to restore a 150-year-old Mariner's Compass quilt. But there is one stipulation: she must live and work in Gray House, a former whaling captain's home, where the quilt is stored. There she meets Army veteran Tom Pereira, the caretaker of Gray House, whose heart seems as hard as the rocky Massachusetts coastline. Over the long-lit months as Kelly works to restore the quilt, she and Tom grow closer. And as she reads stories in a daily journal penned by Mary Gray, she learns the secrets of the quilt and Mary's own sad tale of regret. Then Tom learns secrets of his own family's past, and both Tom and Kelly learn they are tied to Gray House in ways they never imagined.
***

Mmm. I don't know about you, but grilled cheese and tomato soup always makes my mouth water! Perfect comfort food. Thank you, Lynette, for sharing your Thanksgiving saga and a snippet from your wonderful upcoming release.

Now, with the generosity of Wynn-Wynn Media, I'd like to offer a fun giveaway: a copy of Tempest's Course, and a nice set of Pier 1 bath soaps. For your chance at this prize package,  please leave a comment below that includes your e-mail address.   I'll choose a name (via Random.Org) on Thursday, December 12th and notify the lucky winner by e-mail.

Until then, happy reading . . . and Bon appetit!

Posted by CandaceCalvert at 7:43 PM 27 comments: