Side of Squid with that Coffee? 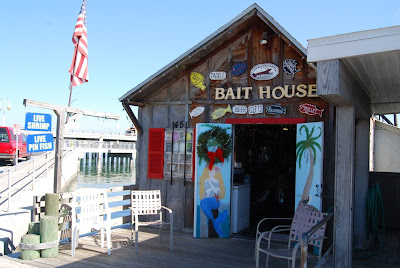 I'm somewhere between 25 and 30% into the first draft of the second book in my new medical drama series, working title: DISASTER STATUS. Which means that I'm not only busy developing charismatic and intriguing characters, I'm also . . "worldbuilding". That is, I'm creating a fictional setting in which my characters will live, learn, love . . . and grow. This is SO much fun to do! And, for an author, the process also becomes a strange sort of portal . . . almost like C.S. Lewis' The Lion, the Witch and the Wardrobe when Lucy hides in the old forgotten wardrobe, pulls aside the musty fur coats . . . and then emerges into a pristine, snow covered woods. In the land of Narnia.

DISASTER STATUS takes place on the Northern California coast, in the small town of Pacific Point, and at Pacific Mercy Hospital. I'm brainstorming scenes that may include wonderful real settings like Santa Cruz Beach Boardwalk, and/or the incredible Monterey Bay Aquarium. But sometimes my characters just start wandering . . . and I must helplessly follow. In fact, this just happened: And now (no wardrobes or fur coats or Narnia involved) I'm standing outside a quirky little beachfront establishment called, "Arlo's Bait & Moor." The proprietors--Arlo and Annie--each had a retirement dream: his to run a bait shop, hers to own a seafront coffee shop. Hence Arlo's "Bait" (squid, sardines, tide tables, fishing hooks) and Annie's "Moor" (fresh brewed coffee, muffins when she's in the mood, holiday themed crochet toilet tissue covers . . . free local gossip). It's half a block from (heroine) nurse Erin Quinn's house, and just above the beach where (hero) fire Captain Scott McKenna regularly trains for the Ocean Rescue Team.

Arlo's Bait & Moor is a well kept secret of the locals . . . and one of the last places to find a supply of safe bottled water when a dangerous pesticide spill creates panic in Pacific Point. It's also where Captain McKenna takes Erin Quinn in an attempt to iron out their differences after they butt heads over handling the city's disaster plan. Here's a couple of snippets leading up to the beginning of that first fateful coffee "date".

(After a town meeting to address the issues surrounding the pesticide spill):


As Erin Quinn strode toward him, Scott reached up to gingerly touch his shoulder--not the injury from his ocean skirmish, but the site where she’d given that tetanus shot--it ached like a son of a gun. And, after tonight’s meeting, he sensed his discomfort had barely begun; this redheaded nurse could become a royal pain in the . . . Scott’s throat constricted. Ah, blast it. Does she have to be so beautiful?


Tall and lean and dressed in jeans, with a sea-green sweater knotted casually around the shoulders of a simple white shirt, Erin Quinn looked fresh and wholesome. Like one of those women on the cover of a healthy living magazine. Or maybe a young mother headed to a PTA meeting. With all that shiny hair lifted into a ponytail, a faint flush high on her cheeks, and the barest trace of freckles. As she drew closer, her brows scrunched together . . . eyes narrowed . . . and . . . uh oh. Not PTA. And definitely not good for his health. But too late now.


“So,” she said, arriving to where he stood beside the table of County brochures, “exactly how irked are you that I added my two cents to your meeting?” Erin raised her gaze to his and then, to Scott’s relief, offered a slow, rueful smile. “On a scale of one to ten? Be honest.”


Scott exhaled softly. “Ten being . . . how I’d react if you’d actually mentioned the Twin Towers and then called me an insensitive clod?”


And later, after he impulsively invites her for coffee:

Blast it. Scott’s face warmed as he realized what a fool he was. He’d invited the most beautiful woman he’d ever met, to a place that sold live sardines.

Trust me, things only get more complicated.

Back to the keyboard.

Oh, and if you call me and get the answering machine . . . or if I'm slow getting back to you on that e-mail, look for me at Arlo's Bait & Moor. I'm getting "hooked" on that coffee.

Writers: What's your favorite kind of fictional world to "build'?
Readers: How important is setting to your enjoyment of a book?
Posted by CandaceCalvert at 11:09 AM

I am such a wordsmith - I love how writers weave such neat things into their stories. Sometimes I've seen writers spend too much time on the setting and lose the story. But you don't seem in any danger of that.

Thanks, Linda. I, too, have an ongoing love affair with words. That was a fun thing about writing cozy mysteries: the play-on-words titles. And, since mine were set on cruise ships, I brainstormed long lists of nautical-isms.
"Moor" must have "surfaced" from my subconcious when my new characters dragged me to Arlo's shop. ;-)

I agree with you, absolutely, about stories getting sidetracked with long narratives built around setting--I'd much rather have "local color" woven in bit by bit, naturally.

Thanks for stopping by!