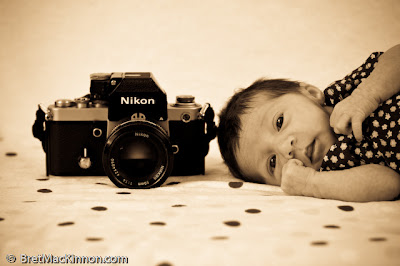 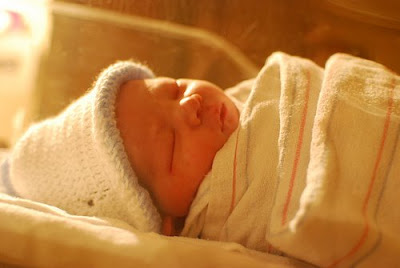 Tomorrow is my birthday and I'll be 59. Despite those decades, I look pretty darned good . . . considering that I've had TWO BABIES in the past two weeks! Wait, don't call the National Enquirer so fast: those were grand babies. Two April blessings: Ashland Skye MacKinnon (posing with photographer Daddy's camera above) in California, and Drake Andrew Peterson in Arizona, snuggled down in the second photo. A boy and a girl. Ashland born 3 weeks early at 5 pounds 12 ounces, and Drake born on Tax Day at 8 pounds 3 oz. Both are happy, healthy and very loved . . . no better start. And though Ashland is the first grandchild "on my side," (meaning a child of my child), I'm proud to say that my Grandma Training started more than a decade ago. Because I married a Grandpa-- Andy had two grand daughters when we met. We'll have our 10th wedding anniversary next month, but in truth I was called "Grandma" for the first time the Christmas before we married. Andy still loves to tease me about that story:

We were engaged, it was Christmas and I was tickled for the opportunity to co-host a holiday party at his California Gold Country home. Included was grand daughter Lillian Rose (living in Las Vegas). She was two, dressed in green velvet, white tights, satin ribbons-- a wide-eyed angel already after my heart. Her great grandmother, Dorothy, was also there. And, because I am( by accusation) more than a little "Martha Stewart" at such times, I'd fussed and decorated and baked . . . to the point of creating gingerbread cookies, frosted (red, white and blue) in the shape of Texas--the Calvert family's native state. Yes, I was that eager to please. (And it was a far cry easier than the armadillo cookies that followed the next year, but that's another story).

After most guests had gone and the party was winding down, a sleepy Lillian toddled down the hallway, rubbing her eyes and repeatedly asking, "Where's Grandma?" I suspected, naturally, that she was looking for her great grandmother, her only grandmother on site.

In moments, my rascal of a Texan fiance--grinning ear-to-ear and loving every second--arrives at my side, carrying his grand daughter. She breaks into a smile, holds out her arms and exclaims "Oh . . . there's Grandma!"

Two year old logic dictates that the woman doling out cookies at Grandpa's house must be Grandma!

And now, a happy decade later I am the proud grandmother of SIX (four girls, two boys) the latest arriving just in time for my birthday. I've never had such a wonderful gift.

Last week I flew to California to meet Ashland, first week in May we'll fly to Arizona to meet Drake. I'm getting this Grandma thing down.

But then, I started Grandma Training early!
Posted by CandaceCalvert at 11:07 AM

I hope grandmotherhood is a few years off for me yet. But--will I have to bake cookies?

Hmm. I guess it does beat changing diapers.

Thanks for stopping by, future (way in the) Grandma! ;-)

What a great story! And what terrific pictures!