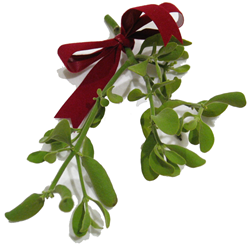 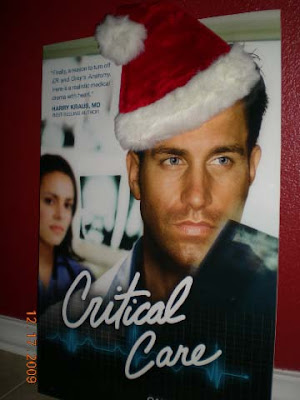 It's 4 days from Christmas and I'm waiting for the refrigerator repairman. For more than a week our freezer compartment has been attempting to build a life-size replica of Frosty the Snowman. Which could be festive except for the fact that he is managing somehow to drip down into the refrigerator . . . and turn the crisper draws into lagoons. Lettuce does not swim well--check out any turtle terrarium.

So, I'm patiently waiting. And because I've already sent a Christmas letter to readers via my newsletter, and posted photos of our tree, home, and Mom's lovely Nativity Set on my FaceBook Page, I thought I'd offer a few quirky and obscure facts about a common holiday tradition:
Kissing under Mistletoe

First some facts about the berry-studded greenery itself:

1) The name mistletoe originated from the ancient belief that it was propagated by bird droppings. "Mistel" is an Anglo Saxon word for "dung" and "tan" (close enough to toe) is the word for "twig"--thus, mistletoe meant "dung-on-a-twig." (Off to a romantic start!)

2) According to European folklore mistletoe was long regarded as a mysterious and sacred plant--bestowing fertility and protection against poisoning. (Ironic, considering how many alleged mistletoe "poisoning" calls we receive in the ER every December!)

3) In England and Wales, a bouquet of mistletoe would be presented to the first cow that calved in a season, in the belief it would bring good luck to the entire herd.

1) Kissing under the mistletoe was first found associated with an ancient Greek festival and later as a primitive marriage rite.

2) In Scandinavia, mistletoe was considered a plant of peace under which enemies (and quarreling spouses!) would achieve a truce.

3) In parts of England, mistletoe is burned on twelfth night, "lest boys and girls who kissed under it never marry."

4) And for those of you who are sticklers for correct etiquette: a man should pluck a berry when he kisses a woman under the mistletoe--and when all the berries are gone, there is to be no more kissing!

There you have it. Mistletoe 101, thanks to Sara Williams of University of Saskatchewan Extension.

On a personal note:

When I was growing up in California, we had plenty of mistletoe growing in the oaks at a park near our home. In the bustling weeks before Christmas some of it would always find its way into our house--to be tied onto a hanging lamp in the entryway. And one time, when I was about seventeen, I was surprised to see that it had also found its way into my date's car . . . about half-dozen sprigs affixed to the ceiling (with Scotch tape--and a great deal of hope, no doubt) over the passenger seat!

How about YOU? Was/Is mistletoe (plucking, hanging--or dodging!) a part of your traditions?
Do share!

And, yes, I did get carried away with the Santa hat on McSnarly. What did you expect from someone growing a snowman in her freezer?

But I did think he looked particularly good under the mistletoe . . .

A warm and wonderful Christmas to all of you!

Posted by CandaceCalvert at 8:45 AM

I'm glad now that mistletoe was never part of our traditions because I'll always think of it as....dung on a twig.....from now on. LOL!

LOL indeed--those old traditions can be fun to explore. We also put out carrots for Santa's reindeer . . . and found plenty of teethmarks on them in the AM. Good thing we didn't have DNA/forensics back then . . . someone would have been busted! ;-)
Hope your Christmas was wonderful and that your New Year is filled with God's sweetest blessings, Michelle.