" . . . But just because we cast the line, doesn’t mean the fish will bite . . . Does that mean we should give up and never fish again? No, it just means we need to keep on casting. Maybe today isn’t our day. But tomorrow might be."
-- debut author C.J. Darlington 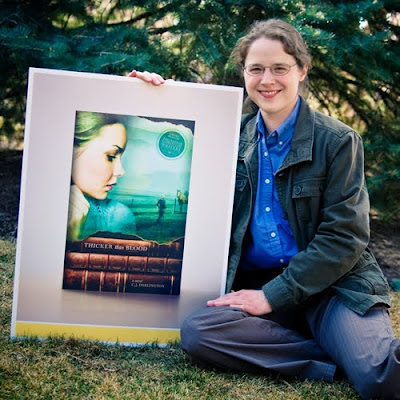 Additional information about author C.J. Darlington may be found in these links:
Remember to leave a comment below, and your name will be included in the January 25th drawing for a copy of Thicker than Blood.
Posted by CandaceCalvert at 12:18 PM

I love CJ's analogy between writing and fishing. What a wonderful way to encourage aspiring authors to persevere! Thanks for sharing the interview, Candace.

What an awesome book trailer! I would absolutely love, love, love to win this book. Great interview, C.J. and Candace.

Great interview!
I'm so happy for C.J. and know this was a long time coming...

I'm truly blessed by the kindness and encouragement you've both shown me... and I think you are both pretty awesome... thank you!

Wonderful interview about what appears to be a very inspiring book.
Please count me in for this drawing.
Melinda Lancaster
revlanc(at)gmail(dot)com

I enjoyed reading reading your interview. It's nice to learn about the storyteller as well as the story itself. Can't wait to read the book
Lisa Stowell
lisastowell64(at)yahoo(dot)com

CJ sounds like such an interesting lady. I'd love a chance to win Thicker Than Blood. Thanks!

Thank you all for leaving comments (and entering the giveaway!). It's been great getting to know C.J. and I know you'll enjoy her book.

I'd love to win a review copy, and I'd read and do reviews :) It sounds like a great novel, and I love the picture of the cover she's holding. Beautiful. Congratulations.

I love the concept of this book. Can't wait to read it. Congrats again, CJ!

What an awesome interview. I loved your insightful questions, Candace, which allowed CJ to reveal a great deal about herself, her writing, and her powerful debut novel.

I've heard so many great things about her book and look forward to reading it.

Again, I so appreciate your enthusiasm for C.J.'s debut. Yes, she IS such an inspiring and delightful person, and her (long-awaited) debut novel is both unique and engaging. You'll love it. Can't wait to add all of your names to my crystal book-giveaway bowl and choose a winner. Monday morning, sharp! :-)

Candace, I left a comment earlier, but please don't enter me in the contest. I was just out shopping and came home with CJ's book. Found it on the same shelf with another great title I highly recommend, Critical Care, written by a very talented author named Candace. :)

I would love to win this book. I've tried winning it before. It looks like I'm going to have a lot of time to read with the bad news I got yesterday.
jrs362(at)hotmail(dot)com

Hey Candy & CJ - sorry it has taken so long for me to read your interview and comment! GREAT interview ~ qu's and answers but then I expect nothing less from two wonderful writers and even more amazing women :)

PS. Don't include me in the giveaway. I have a copy already.

Great interview! CJ is a woman of many hats!!! I write and that's about it!!! Haha!!! I would love to be entered into the drawing! Thanks!!!

Keli, you made me smile--C.J. is my shelf-mate. I love that!

Rel--so kind, thank you. And you provide such an awesome service with your review blog site.

Again, to all of you: I so appreciate your stopping by to read about C.J.--such a shining new star. I can't wait for you to read her work.

Thank you all for your wonderful comments, and Candace... you're a gem! I'm very thankful for the time you took to ask such great questions! Really fun interview. Thank you.

I would like to be entered in the drawing. Thank you! :)

C.J., thank you for stopping by. Getting to know you better via this interview has been wonderful!

Tessa, you are entered in the drawing as well. :-)

Wow what a fabulous interview with CJ. I have been hearing about this one for a while and cannot wait to read it...and the trailer was amazing :)

Great Interview and a very funny way to make writers to go on...I liked the most "I wish the cop will shoot me", very funny (Christy wished the cop would just shoot her.)
I am very happy taht she did nto agve up on writing!!! I read some of CJ reviews on books at Amazon.com. I wish to win that book!!!
Thanks Candance, I read your book by the way and love it,