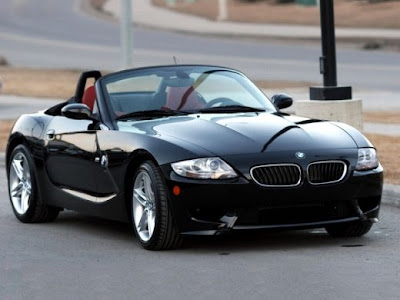 Ever had one of those moments when (for a split second) reality blurred and you weren't quite sure if you were dreaming? No (ahem) I'm not talkin' Senior Moments here (and thank you for reminding me of that). I mean one of those spooky times when the hair prickles on the back of your neck and you think you hear the Twilight Zone theme music. Yeah, that kind of moment. It happened to me this morning in the parking lot of a Staples store. When I saw the BMW Z-4.
Black.
Older model.
Convertible.
Exactly the one I'd written into my third Mercy Hospital book, Code Triage.
Hero (San Francisco police officer) Nick Stathos' car.
The car appears throughout the story, like in this early scene:
Sam glanced at Nick’s older model black BMW, parked next to a trio of Vespa scooters. “Okay if I ride with you to Golden Gate Mercy? That way, Carla can have the city car.” Her eyes—icy blue-violet in the morning light—met his and he knew she was forcing the causal expression. He hadn’t seen her in nearly three weeks. He’d planned it that way, mapped his days to accomplish it; no matter how crummy that made him feel.
“Not a good idea" . . . Nick met her gaze fully. “Leigh’s working.”
And here:
Leigh took a breath and looked Nick full in the face as she ticked off her last point. “I need the last of your boxes out, before the leasing agency--”
“They’re out.”
“Good.”
He stared at her for a moment, then reached for his shirt and yanked it over his head. “I’ll bag up what’s in the wheelbarrow and put the tools away. Then I’ll go.”
“Good,” she said again, her heart cramping.
Twenty minutes later, from inside the house, she heard his car start. She held her breath as it idled at the curb, and pulled away.
At this breath-catching moment:
He watched the young mother drive off, then walked back to his car. He unlocked the door, then leaned back against it, listening to the sounds of traffic in the distance and staring up at the waning moon. Thinking about the little girl who’d sent her favorite toy to a man who dragged her mother down a hospital corridor only this morning. She'd wanted him to remember Disneyland; wanted to believe in happy endings. Nick did too, or used to. Now he wasn’t sure anymore. That chance was waning like the moon, and—
“Nick?”
He looked down to see Leigh standing in the moonlight.
And in this famous San Francisco setting:
But tonight he wanted to take the long way, because it might be the last time he drove through his favorite city with his wife. She was on to his plan way too soon.
“You’re kidding, right? Lombard Street—what do you think I am, a tourist?”
“I think . . . you’d better hang on tight.”
He steered the Z-4 downward into the first of eight hair-pin turns on the one-way section on Russian Hill, between Hyde and Leavenworth, known as “the crookedest street in the world.” A steep red-brick paved road on a 27% grade with a posted speed limit of 5 miles per hour. “No sweat,” he said. “We took these turns during training. I could do this at a raging six miles an hour . . . chewing gum.” Her grin made his chest warm.
“And wipe out an entire bank of hydrangeas,” she said, pointing across the lush hedges and leaning back—way back—in her seat. “Don’t be a maniac, Nick.”
Yes, the Z-4 was Nick Stathos' car. He got to drive it only because I, as the author of Code Triage, gave it to him. Made it black, convertible . . . and older, because he wasn't the kind of guy to drop a lot of money on a new car. I know this because he's fictional and I wrote him that way. Gave him (in addition to a cool car) a tough-guy cop exterior, an incredibly sensitive heart, a painful past, a deep faith . . . and determination to save his failing marriage.
His car. His past. His future. In my hands.
Because I write fiction.
Nice and tidy (and well-controlled) until this morning, when I drove to Staples, San Antonio, to get a black ink cartridge. And saw an equally black BMW Z-4. Exactly like the car I'd imagined (and penned) for my hero, Nick Stathos.
And, as I took it in . . . my jaw dropped. Then the hair prickled on the back of my neck.
Why? You say, after all, how many black BMW Z-4's are there? Lots, of course.
But it was the license plate letters that caught my eye.
NCK.
Nick.
Cue the Twilight Zone music.
Thank you for your empathetic goosebumps.
And now questions:
Readers--have you ever "met" a character in a favorite book?
Writers--ever had an experience like what happened to me this morning?
Do. Tell.
Posted by CandaceCalvert at 1:41 PM

LOL! Terrific story, Candy! I can imagine your mouth open letting all the flies in when you saw that car :)

Haven't "met" any characters yet, but I'd certainly be open to it ;-)

Wow! God is saying "Hi!" and encouraging you, I think!

Hahaha that is too cute!

I drool over Mustangs LOL! I did get to meet one of my favorite fictional characters a few years ago at the All Ford Nationals in Carlisle, PA! Eleanor from Gone In Sixty Seconds was there!! Sigh she was one beautiful car!

That's super awesome Candy!! Did the driver give your character a fair representation?

Great story, Candy. What a moment that must have been for you. Fun!

The manager of a local supermarket has a strong resemblance to the first hero I ever wrote, albeit he's a shorter version. I see him quite often, and sometimes he looks at me, well, strangely, intently. I wonder if that's because of the Are You Really My Character Come to Life? look I'm wearing. He can't be, of course, because my character is from the 1870s, but seeing a modern version of him is kinda cool. :)