Sunday 2/27 10:12 AM
I so enjoyed your responses, that I decided to draw TWO winners: CONGRATULATIONS to JAN MARIE and to KELLY. I will be sending you each signed copies of Critical Care!
-----------------------
As many of you know, I love to open my novels with an action scene, physical, emotional, and loaded with conflict. I want to grab my readers and pull them, breathless, into my characters' world. And in all three Mercy Hospital books, this scene introduces the story's hero. Like in this opening snippet from Critical Care, a finalist for the 2010 Carol Award: 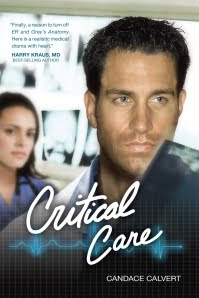 Don’t die, little girl.
Dr. Logan Caldwell pressed the heel of his hand against Amy Hester’s chest, taking over
heart compressions in a last attempt to save the child ’s life. Her small sternum hollowed and
recoiled under his palm at a rate of one hundred times per minute, the best he could do to mimic
her natural heartbeat. A respiratory therapist forced air into her lungs. Don’t die. Logan glanced
up at the ER resuscitation clock, ticking on without mercy. Twenty-seven minutes since they’d
begun the code. No heartbeat. Not once. Time to quit, but--he turned to his charge nurse, Erin
Quinn, very aware of the insistent wail of sirens in the distance. “Last dose of epi?”
“Three minutes ago.”
“Give another.”
Logan halted compressions, his motionless hand easily spanning the width of the two year
old’s chest. He watched until satisfied with the proficiency of the therapist’s ventilations,
then turned back to the cardiac monitor and frowned. Asystole--flat line. Flogging this young
heart with atropine and then repeated doses of epinephrine wasn’t going to do it. A pacemaker,
pointless. She’d been deprived of oxygen far too long before rescue. Logan pushed his palm into
Amy’s sternum again and gritted his teeth against images of a terrified little girl hiding in a toy
cupboard as her daycare burned; and a frantic search in a suffocating cloud of smoke, amid the
chaos of two dozen other burned and panicking children . . .
Exciting, commanding--offering a hero who takes center stage immediately. In the *working draft of my newest book, (tentative title) Trauma Plan, I plan to introduce hero Jack Travis in similar fashion:
“Man on fire!”
What ?
Jackson Travis hurled his duffel bag to the floor and charged back out the clinic’s door, his government-issue mountain boots pounding the splintered wooden porch. He squinted into the April sun: the parking area was swarming with people. A car swerved toward the San Antonio Street curb, brakes screeching, as he vaulted over the porch rail. Honks joined a rising barrage of shouts and screams.
“Someone’s burning up--film it!”
Jack waded into the crowd, clenching his teeth at a confirming whiff of smoke and singed hair, far too reminiscent of those long-ago weeks in Khandahar. . . . {scene shortened for excerpt} . . .
“Hold still!” Jack raced forward, knelt beside the victim—felt an immediate jab of pain in his right knee. He ignored it and went to work, blinking against the smoke and flames as he stripped off his field jacket. “Don’t move, sir. I’ve got you.”
He used the heavy fabric to extinguish the flames; patting, slapping, smothering the still-hungry blaze. Then swaddled the man inside the jacket and eased him down to the dusty asphalt. The burn victim struggled, whimpered, and Jack pinned his arms as gently as he could to keep him from getting up again. The raw panic in the old man’s eyes made Jack’s throat tighten. “Easy, buddy. Hold still,” he whispered. “Let me help you now". . . .
Besides the action, each opening scene aims to give the reader a glimpse into the emotional character of the hero. Logan Caldwell's internal plea that his patient won't die.
Jack Travis' visceral reaction to the burning man's pain, his gentle, reassuring whisper.
I think the combination of strength and compassion is important in a hero. Add his willingness to fight for a cause (for Logan, building a top-notch medical team) (for Jack, saving his urban free clinic), a good measure of human flaws, a conflict-filled situation that forces him out of his comfort zone and challenges him to change . . . and you have the makings of a story.
Of course, if it's a romance--and it is, if I'm writing it--there will be an equally compelling heroine. Stay tuned, in a couple of weeks, I'll give you an opening glimpse at Nurse Chaplain Riley Hale, the leading lady for Trauma Plan.
And be sure and stop by next Sunday, when fabulous author Leanna Ellis "covers my shift."
But right now, let's have a book giveaway! Leave a comment below for your chance at a signed copy of Critical Care. If you haven't read it, here's your chance. If you have, keep it for your collection of autographed books, gift it to a friend . . . or donate it to your favorite library. I want to keep sharing this (exciting and) encouraging story of hope.
Be sure to leave an e-mail address so that I can contact you if I draw your name.
I'll pick the winning name in a random drawing on Sunday, February 27th.
Good luck!
* This brief, edited snippet is a working draft, and will very likely change in the (several) revisions that happen before the book goes to print*
Posted by CandaceCalvert at 1:30 PM

yes, writing is a process and the revisions are so important. thank you for your commitment and devotion to working to get it as "right" as possible! love the finished product! keep it up, dear friend!

Love this book series!!! I always end up reading the entire book in one day! Just cannot get enough!

I have not yet read any of your books. I have the series on my wishlist at Crossings Book Club. Would love to win a signed copy of Critical Care. Thanks for the chance to win.
Debbie
debbiemcla[at]msn[dot]com

I simply can't get enough of your books - please add me in the drawing too. Thank you for writing such wonderful and inspirational books for us to read.

I love and have read the first two critical care series! Can't wait for your new one sounds wonderful! Thanks :)
Beth Gillihan
rbgillihan@gmail.com

Great start! I had my mom read Distaster Status and she really liked it. I have Code Triage waiting for her next. :)

Can't wait for this new book!! I LOVE your books!! Love the start so far!! mommiebethers@ameritech.net

Love this series but since I read it on my kindle I would love to have a copy.
Can't wait to see what happens in the next book.
Wilma
wilmamet6atgmaildotcom

candace, i love your writing...thanks for the chance to have an autographed copy of 'critical care.'

It was great to get a glimpse of your next novel especially after all your tweets about it!

Love, love, love this series!!!
Can't wait to read the next one.

I cannot wait for this book to release! Love this series.

I am anxiously and hopefully patiently waiting for the new book! Your occasional taunts are making me more anxious. :) I enjoy them. AND I have to agree a great opening scene is what hooks me.

Critical Care has a special home on my bookshelf already, but I would love to win an autographed copy to gift to a friend! I'm thrilled to share such quality books as yours, Candace, and I look forward to the new series!

These books are wonderful! I would love to win a signed copy of Critical Care to add to my home library!!

I would love to win! Give me a good excuse to read it again....can't wait for a new one!

So I love your books but was glad there were only 3 books in the Mercy series (at least for now) because then I could get something else done besides reading :) I really enjoy them and think you have done a spectacular job. Keep them coming and I'll continue to find more time for reading.

Waiting for the newest, just read the excerpt.....I'd love to have my name in the pot, but once again, I'm illiterate when it comes to finding it. B"

These books are the absolute best.
You get a mystery, suspense, romance and Christianity.
I would love to win this book.
Thanks for writing such special novels.