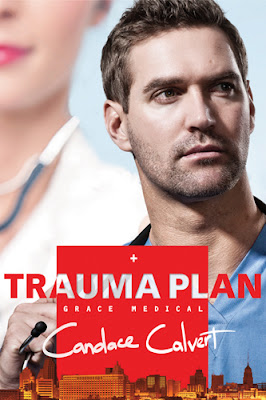 A thousand words--isn't that the old saying: "A picture is worth a thousand words?" When you consider that I've probably teased you a hundreds of times about unveiling the cover for my upcoming book--the cover model hunt, a sigh-worthy Chicago photo shoot, the first cover art draft  . . .
Well, that in itself could qualify for a thousand words!.

So here it is: the official cover for TRAUMA PLAN, the first book in my new Grace Medical series--three novels, three exciting journeys, set in amazing Texas locales. The artist (and photographer), Tyndale House art director Stephen Vosloo, depicts our maverick physician hero, Dr. Jack Travis, in sharp contrast against an almost ephemeral image of heroine nurse-chaplain Riley Hale. At the lower border is the San Antonio skyline. The title is a bold cutout in red, with author name "chalked" in white. I think the whole composition makes a bold statement, supporting the back cover blurb:


Sidelined by injuries from a vicious assault, nurse chaplain Riley Hale is determined to return to ER duties. But how can she show she’s competent when the hospital won’t let her attempt even simple tasks? Determined to prove herself, Riley volunteers at a controversial urban free clinic despite her fears about the maverick doctor in charge.
Dr. Jack Travis defends his clinic like he’s commander of the Alamo. He’ll fight the community’s efforts to shut its doors, even if he must use Riley Hale’s influential family name to make it happen.
As Riley strives to regain her skills, Jack finds that she shares his compassion—and stirs his lonely heart. Riley senses that beneath Jack’s rough exterior is a man she can believe in. But when clinic protests escalate and questions surface about his past, Jack goes into battle mode, and Riley wonders if it’s dangerous to trust him with her heart.

Lest you think that the saying "worth a thousand words," means this cover allowed me to skimp on prose . . . no such shortcut there. This book may indeed be the longest I've written--packed with non-stop action, heart-tugging emotion, humor, great romance . . . all set against the colorful backdrop of San Antonio at Fiesta time. Though it's already available for pre-order, Trauma Plan is officially scheduled for release (on or perhaps slightly before) May 1st.  I can hardly wait to share!


Here's what early reviews are saying about this book:


"Candace Calvert has crafted another gut grabbing medical thriller. Trauma Plan kept me engrossed from beginning to end as I immersed myself in the characters' lives, felt their pain and rejoiced in their victories. The faith message was clear, the medical traumas heart stopping and the romance heart melting. I loved everything about the story, especially little Hobo and his two wheeled cart. A great read and one for your keeper shelf." - Lynette Eason, award winning, best-selling author of the Women of Justice series

"Spine-tingling suspense  and a power-packed shot of adrenaline heat up Candace Calvert’s TRAUMA PLAN. Calvert’s tight writing and well-developed characters made for a story I could not stop reading. TRAUMA PLAN doesn’t disappoint, so grab your parachute and take a dive into an amazing story packed with solid characters, including Calvert’s Rx for great fiction—a heart-throb hero!!" ~~Ronie Kendig, author of the Discarded Hero series.

"Candace Calvert paints an exciting story on a canvas she knows very well, the world of medicine and the people who inhabit it. Trauma Plan is a novel that will grip your heart and keep you turning pages."
--Richard L. Mabry, MD
--Author of the Prescription For Trouble series

I'm still pinching myself at the honor of having endorsements from those talented authors!


So, what do you think of the new cover: worth a thousand words?


Posted by CandaceCalvert at 7:42 AM

Congratulations on the bright, bold cover, Candy. Love the way they "chalked" your name.

That cover is looking good! Can't wait to read it.

That is a really, really, REALLY AWESOME COVER!!!

Don't mind sayin' that one is easy on the eyes. ;-D

a great cover...looking forward to reading this novel :)

So exciting!! What an awesome cover :0