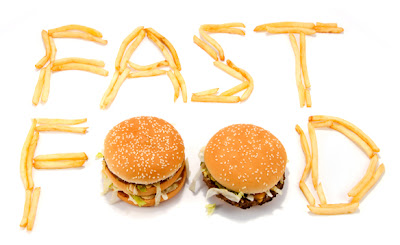 I see that look in your eye: very wary, like you're thinking : "Candace is all about the veggies, if she's using the word "FAST," it's probably about one of those health-nut juice fasts, or . . ."

I don't blame you for your skepticism. After all, I did post that recipe for pizza without pepperoni.

But seriously, today's post really IS about fast food. Because, let's face it, at one time or another we all indulge (or have indulged) in some of those paper-wrapped, styrofoam-boxed,  ever-enticing super-size, hot-oil-and-salt, cheese-topped, sesame seed sprinkled . . . nose-perking meals. Even if we knew we shouldn't, swore we wouldn't, and fully intended to toss up a big healthful salad at home. 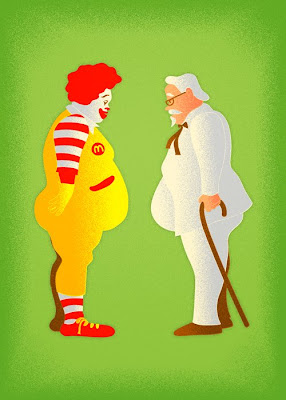 I thought today, we should challenge each other to just come clean, 'fess up to our favorite fast food hankering.

Hi. My name is Candace, and I once had a thing for Taco Bell bean burritos. With the green chile sauce. Doughy white flour tortilla, mushy refried beans, green sauce . . . and nice dollop of sour cream.
I lived in Oregon at the time, a young ER nurse pregnant enough to waddle--and an insatiable craving for Taco Bell bean burritos. We lived in a small town, so sometimes to avoid embarrassment I would drive to the next town to get my second (or third--did I say that?) burrito of the day. Really.

When I finally had my son, the labor and delivery nurse was ecstactic about his full head of hair. She asked if I'd eaten any special food during my pregnancy. On my cloud of new-mother bliss (possibly helped along by my C-section pain meds) I confessed to the bean burritos. She said "Ah, yes," with a very knowing expression on her face. To this day, I still don't know if that meant she liked them too, or if bean burritos have an actual impact on baby hair.

I do know, however, that fast food played a small part in my newly released novel, Rescue Team. In this short snippet, a hospital volunteer, Judith, offers help to the daughter of patient having emergency surgery. But, as you'll see, this young mother had other important things on her mind:

“You know—” Judith glanced around the waiting room, satisfied that the patients were being triaged and roomed in a timely manner—“there’s a nice waiting room up near surgery. TV, hot cocoa, coffee, tea. I even know where they hide the graham crackers. Why don’t I take you up there to wait? It’s close to the post-anesthesia recovery room.” She smiled down at baby Harley. “So when Grandpa wakes up and wants to see his beautiful little—”


“She won’t be here.” Trista pushed her glasses up her nose. A dark smudge on the lens blurred one of her eyes. “Neither of us. They’re keeping him overnight. I’ll get a message on my cell phone when I have to come pick him up.”

“Oh.” Judith watched as Trista reached for her purse. There was dried blood on her sleeve, which made Judith worry it was also the source of the smudge on her glasses.

“I’ve got the car. They locked up Dad’s wallet, but . . .” Trista’s brows rose ever so slightly. “There was $11.96 in the front pocket of his pants. He’d figure someone would steal it. So I’m thinking Chick-fil-A. Spicy chicken sandwich and—” the corners of her mouth tugged upward—“a peppermint chocolate chip milkshake.” She wedged the bag of clothes under her arm and reached for the baby seat. “I’m going there now. There’s one right at the end of my street.”

“Here,” Judith said. “Don’t forget Harley’s rattle.”
She watched them go. Then realized it was the first time she’d ever seen Trista smile.

***
That must be some good chicken, or there's more to this young mother than meets the eye. You'll need to read the story to know for sure . . .

So, how about YOU? Do you have a fast food weakness?
Posted by CandaceCalvert at 4:03 PM

Ha! Ann, you gave me a fast food flashback. When I was in college,I spent spring break in Mexico. Got totally sick with--ahem--Montezuma's revenge. BUT when we crossed back over the US border, all I could think about was a McDonald's quarter pounder with cheese. It was worth the gastric repercussions! Thanks for stopping by the blog.

I admit, I'm sucker for a picnic cheeseburger with gasp! bacon from Backyard Burger! And season fries. Shame. Shame. Oh the shame! LOL

My fast food weakness is pizza. I admit it is not fast food but watch me put it away. Talk about fast!
Janet E.
von1janet(at)gmail(dot)com

I am absolutely bananas about chick fil a's nuggets and waffle fries. All drenched in their chick fil a sauce. Mmmm mmmm! Plus, they have a play place for the kids so I can park near the glass and enjoy the spoils in peace. ;) win win!