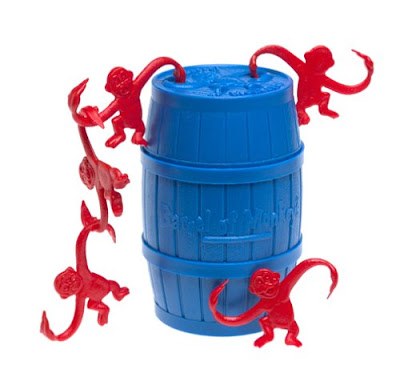 As you may recall, part of my current course of study (toward becoming a lay chaplain), offers an introduction to the practice of meditation, and . . . it has been a real challenge. Evidenced by the evening I got trapped in my wrist watch, while attempting a self-imposed quiet time.

My studies say, "We are what we do in silence." Profound, and perhaps troubling since today's culture is filled with frenzied activity, 24/7 instant communication, and non-stop external noise. Hardly peaceful. Worse, however, is the constant "internal chatter" of the unconcious mind; the endless stream of erratic and egocentric thoughts Buddhists call "a monkey mind," because it most resembles a tree of agitated monkeys all screeching at once. Yipes:

I've got a whole JUNGLE in there.

Now maybe my monkeys are genetic, maybe they jumped onboard during all those adrenaline filled years as an ER nurse, or maybe they simply come with the whole "writer package" mind-set; I'm not sure. But I truly admire people who seem to be . . . without a traveling circus. It led me to write this scene for DISASTER STATUS, which shows our heroine ER nurse Erin Quinn, wrestling (boxing actually) with this very same concept:

Erin stilled the speed bag, and then glanced down at Elmer Fudd. The goldfish, transparent fins swirling, stared placidly out at her. No tsunami waves. She’d finally figured out how to punch the bag without shaking the wall behind his little glass condo. It had to do with her foot position and the arc of her swing. Balance. Just like Annie said. Erin needed to stay balanced over her feet, be strong and consistent, and stick to the moves, the routine . . . no crazy stuff. Crazy.

She pressed a towel against her damp forehead, her stomach fluttering. She wasn’t going to think about Scott. She’d eaten two and a half brownies, whipped her heart rate up to one-forty, and was sweating right through her tee shirt. Chocolate and endorphins--he was supposed to be banished. It wasn’t fair. All she was asking for was a little bit of peace.
Erin stepped close to window and smiled. Now there was the perfect vision of serenity. Her grandmother, rusty auburn hair tied up with a batik scarf, sat on the garden bench in the rosy- gold sunset, her back straight, hands resting on her thighs, and eyes gently closed. Her breathing was rhythmic and intentional. Beside her lay her well-worn Bible. Centering Prayer. She’d done this for as long as Erin could remember. Explained it alternately as “my quiet time,” Christian meditation, “listening with the ear of my heart,” and-- when her life was particularly hectic and her temper short--“my only sliver of sanity. Now scoot and leave me be!” During those awful months of her husband’s illness, this daily silence had seemed exactly that. Her sanity and her strength.

Since childhood, Erin had tried over and over to emulate her Nana’s peaceful repose. And failed completely. The truth was that profound stillness made her edgy. Silence prompted her to . . . fill it. Her work, the chaos of ER--sirens, nervous chatter, beeping alarms--felt far more normal. And on her days off, she whacked at her speed bag, shadow boxed on the beach or jogged along the sand, listening to her Ipod instead of the waves. Even when she curled up to read, she tapped her foot to an endless stream of music. Deprived of that, she’d hum. Always moving, never silent-- it was who she was. Erin shook her head. If she were a goldfish, she’d welcome the tsunami.

Guess what Erin's challenge will be? Yes . . . to learn to be still and listen to what is truly important. Will she learn that easily?

No. Her heart--and the life of someone she loves--will be at risk before she learns the difference between being "strong" and finding "strength."

Meanwhile, I'll be working on my own slice of silence and serenity. It's getting easier, step by step. On tiptoe. Quietly. Shh.

So much to hear.

How about you? Traveling circus, or present-moment peace?
Posted by CandaceCalvert at 10:55 AM

Oh yeah, me too! I remember the old psych phrase "flight of ideas" and that's wht I feel like sometimes when I pray or get to the "listening" part. Sometimes I stop and think "how did I get here?" (to that particular thought) because it's so far removed from where I started!

I hear ya--I guess we're still okay as long as our "flight of ideas" doesn't erupt into "word salad." Remember that one? ;-)