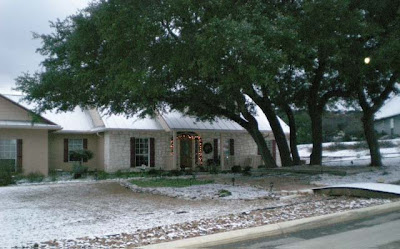 This is an early morning shot of our home . . . early meaning I threw a coat over my jammies, shoved my feet into a pair of clogs and dashed outside. Because it SNOWED. And this does not happen in semi-tropical South Central Texas. We're climate of things "jungle-y," like warm afternoon rainstorms, rainbow colored birds, chameleons, geckos . . . and creeping vines that cover a house as fast as that one in "Little Shop of Horrors." Except (as far as I know) no one's actually been eaten by a vine. So far. We should probably do a head count of neighbors on summer nights.
Anyway, this amazing snow happened last Wednesday--the day our California kids were catching a plane to sunny Texas. The weather folks flirted with a "possible snow" forecast, but no one truly believes those reports, right? Still, it was cold. Cold enough to throw beach towels over my potted plants and tenderly blossoming dwarf Meyer lemon tree. And to turn on the electric blanket. Still . . . snow? C'mon.
I awakened just before dawn in my snuggly nest of warmed sheets, and hubby says . . . "It snowed. Go look."
Well, this man--an infamous teaser--has about as much credibility as a Texas weatherman. So, I say, "Uh huh. Right."
And he says, "Really. I was up at 3:00, and I saw it."
"Sure," I smirk. "And were deer making snow angels?"
He shrugs and pulls up the covers, and I . . . can't stand it. I know he's hooked me like a baited bass, and I know the tile floors are going to be mercilessly frigid, but . . .
And there it was: SNOW. Accompanied by much girly squealing. Many Tigger-like leaps. Followed immediately by the jammies and clogs and camera scenario. I'm out the door in Winter Wonderland.
It snowed.
On the lawn, on the roof, on our little wooden bridges, around the pool, on the beach towel covering my lemon tree . . . everywhere. Like white royal frosting on gingerbread.
I took photos of everyone's house on our little cul de sac. I took a photo of my neighbor grabbing his newspaper. I looked for deer . . . making snow angels. No photo proof. But still . . .
I went from non-believer. To believing.
Of course, as an author of inspirational fiction, I love the hopeful message in that.
I'm including this photo on our Christmas cards.
In this season of miracles . . . snow.
Posted by CandaceCalvert at 7:10 AM

Yeah, my girl is NOT happy that everyone seemed to get it but our little area.

Oh phooey, that's too bad. Part of the magic was knowing how many Texas children got to see snow for the first time.