Ask most folks to make a list of things to do, see in their city--small town--and I'd willing to bet that local eateries will be represented. Especially little off-the-main spots that the locals know and love. Those spots (some even fondly called "dives") as seen in the popular PBS food show, "Diners, Dives & Drive-In's."  You know what I mean: places that may not look fancy on the outside (or even the inside), but the atmosphere is friendly, fun, casual. The menu reasonably priced (maybe even cheap!) but the FOOD is amazing! And brings you back again and again.

These favorite eating places are most often distinctive to the region, which makes it twice as interesting--especially for visitors. In the little town we lived in in Hill Country Texas, a few of these spots were: The Dodging Duck, The Hungry Horse . . . and Popo's. Chicken fried steak: You betcha. Peach Cobbler, sure. Fried Green Tomatoes--oh, yeah. 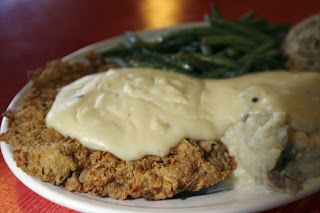 My northern California home town, Sacramento, offers diverse eating options, from BBQ to Vietnamese, Indian, Japanese, French, Turkish, Italian,Vegan . . . you name it, we got it. And since Sacramento is known as the "River City," some of the really fun places are on along the river, down the delta. Seafood is often the focus. Two of our old favorites (equally accessible by car, yacht, or humble fishing boat) are Crawdad's and TheVirgin Sturgeon--in fact, one of my early dates with hubby found us tied up at a dock on the Sacramento River. Fishing boat, not yacht. 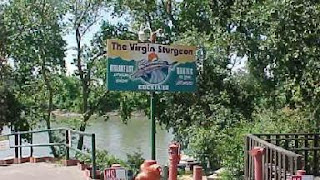 As you already may know, I LOVE to include food in my novels--let the readers "taste" the setting. I especially had fun with the Austin, Texas setting in my (soon to release) novel, RESCUE TEAM.

In this scene snippet, we find Wes Tanner and Kate Callison on a first date--a day at Lady Bird Lake, and a stop for food at one of Austin's famous, quirky "food trailers."

Wes watched with amusement as Kate devoured her meal. Or tried to. “How you doin’ with your first taste of SoCo trailer food?”

“Ah . . .” Her expression was a comic mix of bliss and frustration. Coleslaw dribbled from a tortilla stuffed with chicken and fried avocado and shoved sideways into a paper snow-cone cup.  She brushed at a sprinkle of crumbs on her clingy navy blue cardigan. “This is fabulous. The chicken’s coated in sesame seeds, almonds, corn flakes, and . . . chili powder, I think.” She raised her voice to compete with a boisterous group of college students at a nearby table and lively bluegrass fiddling from somewhere across the street. “Messy, but incredible.” 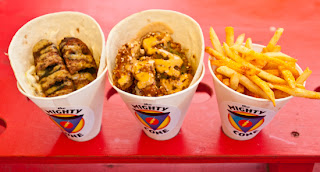 “And merciful.” Wes pointed at the rails along the large mobile food cart, providing holes to hold the cones for diners who preferred to stand. “I kept my promise.” 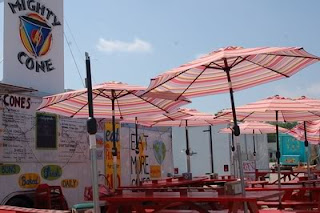 The Mighty Cone, one of many trendy food carts on South Congress, also offered red-painted picnic tables and strings of globe bulbs to add light and romance—to a gravel parking lot with construction-zone ambience. Upscale food, no frills. He’d gotten a kick out of seeing Kate’s reaction to the fleet of carts and trailers boasting names like Wurst Tex, Coat and Thai, and Austin Frigid Frog.  And the girlish delight on her face when she spotted Hey Cupcake!, a shiny aluminum Airstream with a huge pink cupcake hoisted atop. Kate had nearly squealed; apparently pink frosting was a counterbalance for her natural tendency toward prickly. Wes was determined to find more ways to make that happen . . . 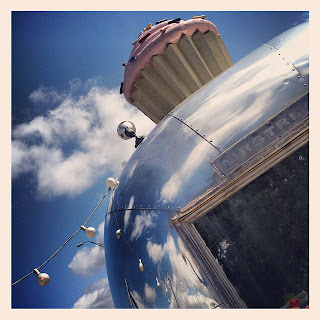 So, YOUR turn: What's the hidden treasure in your city/town?  What special eatery makes you want to "dive in"?  What does your town taste like?  Do share!
Posted by CandaceCalvert at 10:37 AM

Candace, If you ever miss chicken-fried steak enough to come to your senses and return to God's country, let me know--there are some great places here in North Texas.

Ha, Richard--I'll bet you some have great places there. Hubby grew up in Hurst, and cut his teeth on chicken fried steak.

Funny thing, but where I live is amazingly similar to your book! :-)

Although I have never ventured to the SoCo food trailers!

Yes, I'm sure you can relate to most of the local settings, Linda--I LOVE Austin; how cool to live there!
We ate some great food on our trips to the city, but didn't get to the trailers, either. Such a fun concept to write about, but then that's Austin: wacky, weird and wonderful.

We have a great restaurant here in Panama City called Roughstocks. They have steaks and seafood. It is so very hard to choose between the two. And a wonderful homemade peanut butter pie!! Yum!!!! Think we will go there on Monday for our 18th anniversary. :)

Yacht Charter Dubai It’s a great site to see. That will help for improvisation of me. Will definitely marked as Bookmark